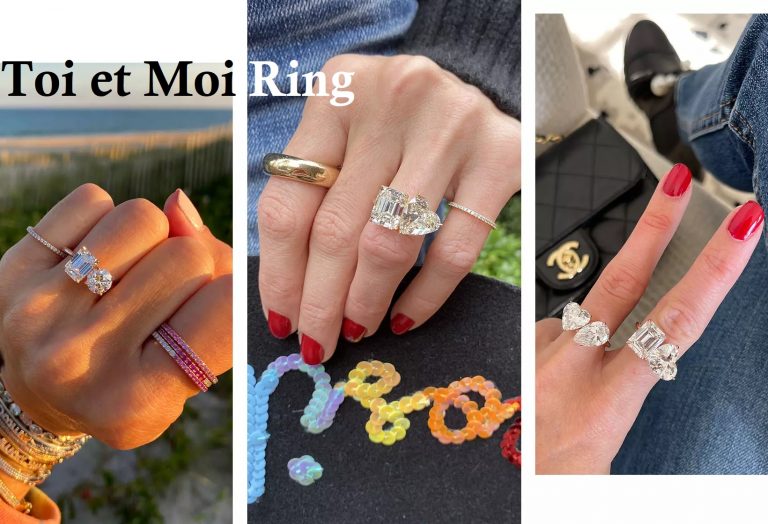 What is Toi et Moi Ring?

Toi et Moi Ring is a type of engagement ring that feature two diamonds of the same or different size instead of one. Two gemstones are used to symbolize the couple’s union and their lifelong commitment to fidelity as soul mates. It is currently the most avant-garde alternative to classic engagement solitaires.

This type of engagement ring was very common in past decades when the high jewelry boom arrived, so it is practically considered a vintage style jewel since it has risen from its ashes with much updated models.

Today the design possibilities of this type of ring are multiple and we can choose between the traditional ones, with diamonds of identical characteristics and qualities, and between more avant-garde models that carry, for example, a diamond and some extra detail with a special meaning for the couple.

Due to the re-launch of this type of engagement ring, in our online jewelry store Navas Joyeros Boda we have a section specially dedicated to the Tú y Yo rings. All products in the collection are manufactured to the highest quality. In addition, our status as manufacturers allows us to offer them at an unrepeatable price since we do not inflate prices as is the case in traditional jewelers or department stores.

What is the Toi et Moi ring’s History?

Toi et Moi, meaning ‘you and me’ in French, might be some of the most romantic and simple terms someone could hear from a loved one. Toi et Moi rings are created with two stones that are set next to each other on the same ring.

The Toi et Moi Ring was trendy during the Edwardian and Belle Epoque periods – times that are popular for their romanticism. Not only is the setting of the gems important, as their closeness symbolizes balance and equality, but the two stones are important too.

Diamonds are traditionally worn on engagement rings or wedding rings and are popular in Toi et Moi rings, but other stones such as sapphires, emeralds. Or even pearls usually make up the other precious stone on the Toi et Moi ring.

Napoleon Bonaparte’s Toi et Moi ring was one of the first to be mentioned in jewelry history. Napoleon was a revolutionary soldier in the French army in 1796. Napoleon presented his first wife, Josephine de Beauharnais, with a stunning Toi et Moi ring. Josephine was 6 years his senior at the time, and she had two children from a previous marriage.

Napoleon’s family was dissatisfied with the union, but nothing could stop the two lovebirds. The Toi et Moi ring is made of gold and features a delicate band that holds a pear-shaped sapphire and an antique pear-shaped diamond. This ring remains a powerful symbol of romance and love.

While there are no restrictions on the precious metals that should be used for two stone rings, the gold family is unquestionably the clear winner. Most designs incorporate white, yellow, and rose gold’s, which works extremely well with these designs. Platinum is also an excellent choice due to its elegance as well as its strength.

Toi et Moi Rings work exceptionally well with antique diamond cuts, ranging from old mine cuts to rose cuts, due to the antique appeal of the majority of its designs. Other popular classic shapes include the Pear, Heart, Oval, and, of course, the Brilliant Round Cut.

New trends of using popular side stones for two stone rings have seen some amazing and stunning results that work tremendously well. These contain Half Moon, Kites, Baguettes, Trapezoids, and other unique cuts.

There is an incredible amount of rich and unique design choices when it comes to Toi et Moi designs, due to the ample space and relative closeness of one diamond to the other, there’s a lot enough room for creative ring styles.

While an open ring style can be used to describe several other design styles, it is most commonly used to describe traditional circular rings with an opening at the front and two precious stones at each opposing end. This is the most popular option for highlighting the companionship of each stone in a Toi et Moi style Ring.

You and Me Bypass Rings

In terms of symbolism and visual appeal, the Bypass ring style is ideal for two stone designs. It is one-of-a-kind and eye-catching, while remaining minimalist and clean, and is achieved by twisting the normally straight lines of the ring band and bypassing one another. Bypass rings date back to the Victorian era, and just as two stone rings have made a huge comeback, combining the two is a fantastic idea.

Fans of vintage and antique styles are often drawn to filigree rings, which are one of the most complex and intricate designs for rings and necessitate the skills of talented and experienced artisans. They are distinguished by their delicate and intriguing ornamental patterns created by threading precious metals such as gold. The Filigree’s vintage nature makes it an excellent ring to complement the classic two stone ring designs.

Toi et Moi is suitable for a wide range of designs, from Cluster Rings to Halo Two Stone Diamond Rings. The design’s ability to make daring combinations appear to be a match made in heaven is what sets it apart.

Two stone Engagement Ring take the concept of contrasting colors in jewelry to the next level. One of the best ways to accomplish this is to pair a classic diamond shape with a one-of-a-kind gemstone of rich, consistent color next to a white diamond. The following are some of the most popular diamond and colored gemstone combinations in Toi et Moi rings.

2021, abundant in romance in the glow of flashlights, was only a preview of what awaits us in the coming months. Because of these seem to be under the sign of love. Proof? A few days after the sumptuous New Year’s Eve celebrations, the world spread information about the engagement of the musician Machine Gun Kelly with actress Megan Fox.

Jackie Kennedy had an unusual ring for the 1950s – the emerald and diamond were surrounded by baguette-cut diamonds. Years later, the miracle “Moi et Toi” from Van Cleef & Arpels has been redesigned, replacing the original diamonds with cleaner, marquise cut diamonds.

Over the decades, other newspaper headlines became engaged with symbolic rings. Only recently, Emily Ratajkowski and Ariana Grande have joined the owners of “Moi et Toi”. The first was gifted by husband Sebastian Bear-McClard with the Alison Lou project. The 18 carat gold ring is adorned with a 2 carat princess cut diamond and a 3 carat pear shaped diamond – Pear and Princess Toi et Moi Engagement Ring.

The American singer, on the other hand, wears an oval diamond set on a platinum wedding ring, accompanied by a small pearl, which, according to fans’ guesses, comes from her grandfather’s tie clip.

Until the divorce of director Alan Ferguson in 2019, the “Toi et Moi” ring also shone on Solange’s finger. The singer received her beloved jewelry inspired by the art deco style with two asymmetrical diamonds connected by an open ring.

A Toi et Moi ring is one of the most romantic and trendiest ways to express your commitment and devotion on absolutely any occasion. It’s not only beautiful to look at, but it also has a deeper meaning, as you’ve learned today. So what are you waiting for? Go on Google and search Gemistone.com and visit our online store and Shop Now!!

Learn our creative side take over in 2022 with a beautifully designed Toi Et Moi ring blog with ring styles.

Apart from this if you are interested to know more about A Guide To April Birthstone – Diamond then visit our Lifestyle category.

How Does The Tudor Glamour Watch Make A Perfect Gift