What languages ​​are spoken in Switzerland?  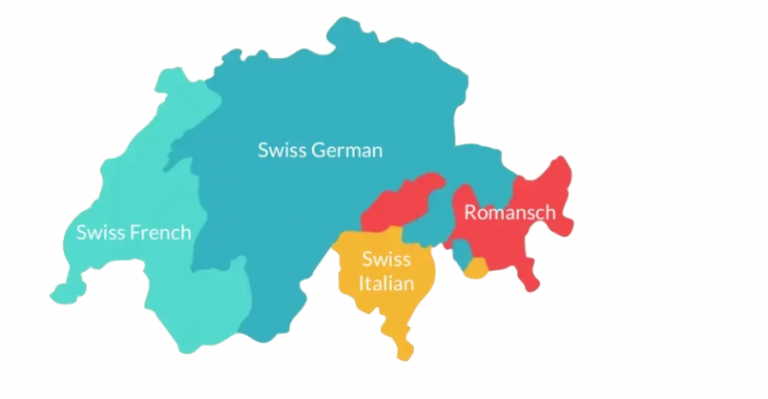 Multilingualism is popular in Switzerland – there are several official languages: German, French, Italian into English translation. Depending on the region, only one language is official. Because the so-called linguistic territorial principle applies. Read interesting facts about the four languages ​​in Switzerland!

Who speaks which language in Switzerland? (distribution according to population shares)

According to the Swiss Federal Statistical Office , almost two thirds of the Swiss (62.3 percent) spoke German or Swiss German in 2020 . This makes the German language or its Swiss German variant the most widely spoken language in Switzerland . The number of German-speaking Swiss is therefore tending to decrease. In 1970, 66.1 percent of Swiss people still spoke German.

French follows on the list of the most spoken languages ​​in Switzerland . It was spoken by 22.8 percent of Swiss in 2020. Compared to the French-speaking Swiss in 1970, this is an impressive increase of 5.4 percent.

And Romansh has also experienced a decline over the past five decades: while it was still spoken by 0.8 percent of the Swiss in 1970, in 2020 only 0.5 percent spoke it.

At the same time, the Federal Statistical Office estimates other languages ​​(non-national languages), above all English and Portuguese , to have grown from 3.7 percent (1970) to 23.1 percent (2020).

The top 10 main languages ​​in Switzerland, as named by the Federal Statistical Office for 2020, are as follows:

Are you looking for translators and court interpreter services for English, Swiss German, Swiss French, Swiss Italian or Romansh? As a professional translation agency, our language experts also have a perfect command of the Swiss language variants.

Which language is spoken where in Switzerland? (distribution by region)

In what is known as German-speaking Switzerland (orange area on the map above), i.e. in the north, east and center of Switzerland, German is the official language. Which is Swiss German, which its speakers understand as a Swiss dialect or Swiss vernacular of Standard German and refer to it as Schwyzerdütsch (also Schwiizerdütsch ) or just Dütsch. Various Alemannic dialects that are no longer common in Germany and Austria come together in Swiss German. These are combined with many French expressions.

Anyone traveling in German-speaking Switzerland will quickly notice that different dialects of Schwyzerdütsch are spoken there. However, you can always get by with Standard German, because the Schwyzerdütschen use it for their formal correspondence, in books and in the media.

In western Switzerland (green area on the map above), i.e. in the cantons of Geneva, Vaud, Neuchâtel and Jura, Swiss French is spoken that hardly differs from the French spoken in France. Some say that when speaking French, the Swiss lengthen the vowel sounds, making the language sound “slower” overall.

Swiss Italian (purple area on the map above) is spoken in the southeast of Switzerland, i.e. in the canton of Ticino and in the southern part of the canton of Graubünden (in Italian: canton Grigioni). Compared to the Italian Italians in Italy, the Italian of the Swiss has many expressions from German and French.

One of the three Rhaeto-Romanic languages, Graubünden Romansh, Dolomite Ladin and Friulian is spoken in several areas of Switzerland (pink colored areas on the map above). It is also called Rumantsch or Alpenromansch. The fact that this language still exists today is a small linguistic miracle: According to Wikipedia, the Romansh dialects are residual dialects of Latin from the Roman province of Raetia, which can neither be assigned to the Romance languages ​​nor classified as their dialects.

Multilingualism is popular in Switzerland

Multilingualism has several dimensions in Switzerland:

If you want to communicate with or in Switzerland, you not only need knowledge of the four official Swiss languages, German, French, Italian and Romansh, but also a lot of language knowledge, because the Swiss vary the source languages ​​of their languages ​​in many different ways.

Thanks to their language skills and knowledge, our professional translators and interpreters for LST are able to translation of documents and regionalize your templates for Switzerland.

Global Epigenetics Market , By Type , By Applications , By Regions – Global Forecast to 2027